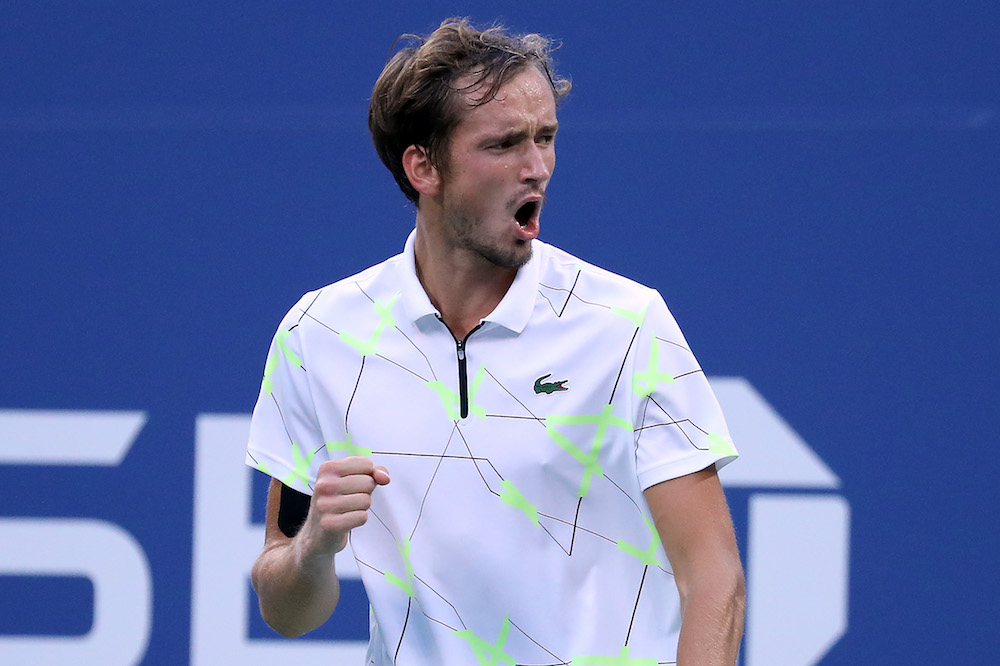 Daniil Medvedev in the fourth round of the US Open 2019, New York USA | (Photo by Mike Stobe/Getty Images)

By Ros Satar at the Nitto ATP Finals 2019 in London, UK

LONDON, UK – Defending champion Alexander Zverev opens his campaign as all eyes will be on Rafael Nadal and whether he is fit to play, while Daniil Medvedev and Stefanos Tsitsipas make their debuts.

A year ago, Stefanos Tsitsipas won the NextGen ATP Finals and while his defeated opponent Alex De Minaur was on the losing end for the second year in a row, Tsitsipas has graduated to the big leagues. However, he does not have the easiest start as he faces the man of the latter part of the season Daniil Medvedev.

The Russian will be looking for his 60th victory of what has been a breakout season, and certainly has the upper hand over the Greek including breezing past him for the first straight sets win in Shanghai last month.

Tsitsipas is the youngest in the 2019 field and while he made the Australian open semi-finals at the start of the year, he has struggled to hit those heights for the rest of the year, with two first round exits at Wimbledon and the US Open.

Even though it was a straight sets loss to Medvedev in Shanghai, they have always had close matches and with the speed of this court on the fast side, it should help play to the Greek’s aggressive baseline style of play, although he may well be punished for over-pressing.

Although tall and rangy, Medvedev is not generally seen as being a huge server, but it will be interesting to see how this court takes to his serve. There is no doubt he is at his best when rallying from the baseline and he should be able to turn the speed of this court to his advantage.

Although he has qualified 15 straight times for the year-end championships, top seed Rafael Nadal has only made eight prior appearances due to injuries, and he comes into this tournament having not finished a tournament since winning the US open. He had to withdraw from Shanghai and conceded a walkover in Paris.

By contrast Alexander Zverev has finished come into the finals at a bot of a canter after a very up and down year, on and off the court. Having upset the then No. 1 Novak Djokovic last year for the biggest title of his career, he actually scrapes in with just a lone title to his name this year.

Much as with the first singles match of the day, Zverev will have to look to overturn a 0-5 deficit to get off to a winning start and it is no secret that Nadal has never enjoyed winning on the indoor surface.

Zverev cannot afford to be quite so passive as he can be, preferring to stay and the back and rally all day long. He is precise at the net and he should exploit that more. Nadal really will want to win this in two sets – if Zverev can drag this out longer, he ought to be the favourite to turn the tide.

Medvedev & Tsitsipas play not before 2pm, with Nadal & Zverev not before 8pm.

How to Watch/Follow the ATP Tour