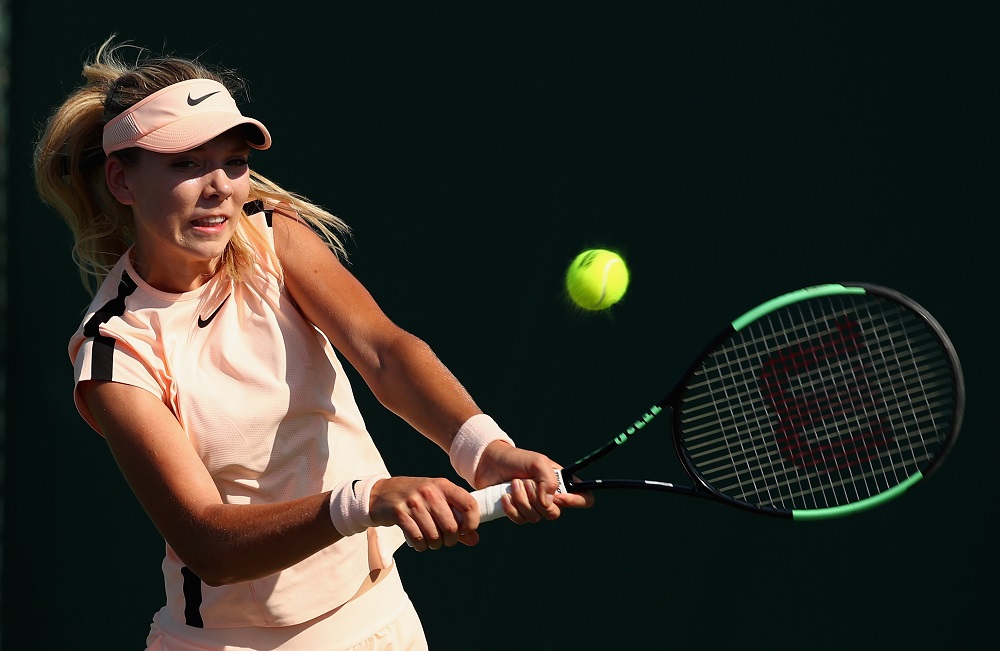 By Ros Satar, in Melbourne

MELBOURNE, AUSTRALIA – With seven out of eight Brits in the main draw all playing on the first day, Katie Boulter, Heather Watson and Harriet Dart open up the day’s play.

The British No. 2 Katie Boulter has already enjoyed a bit of Aussie hospitality having played in the Hopman Cup before hot-footing it over to Hobart for qualifying, before finally getting her first win of the season in the Kooyong exhibition, albeit it with just one set played.

It is time to get serious as she takes on former World Top 10 player Ekaterina Makarova. While she is a long way off the form that saw her crack the Top 10 in 2014, she is still a force to be reckoned with, both in terms of her experience and that tricky leftie touch she can bring to the court.

What Boulter will have is a lot more match sharpness than the Russian, While Boulter has been managing her own schedule having been diagnosed with chronic fatigue syndrome, Makarova had a frustrating 2018 where it took her until Wimbledon to win any back to back matches but she never really drove on from there.

This is by no means an easy win for Boulter – she may have played some tight matches at the Hopman Cup but she needs the confidence from the wins, and up against another aggressive baseliner with a tricky leftie slice, she might need to do more than just search for her forehand, and will need to keep a cool head if she wants to start with a win.

Boulter & Makarova are scheduled on Court 12 at 11am (Midnight GMT)

Another player in need of a few wins is Heather Watson, who drops just below Boulter in the rankings, and has a bit of a tough opener against one of the lower seeds, Petra Martic and for the amount of time the pair have been on the tour, remarkably they have not met.

Watson has been to the third round once here (2013) and was unlucky to lose two tight sets last year to bow out once more in the first round. Martic had a slightly better run last year, to the fourth round, but only has one match under her belt coming in.

The middle of the year in 2018 was a bit lightweight for Martic, who had her best results on the hard courts reaching the Indian Wells quarter-final, the Bucharest final and winning in Chicago ($150K), so she is not without strengths in her game.

The key for Watson will be to try and be more consistent throughout – often it can be either a strong start and then tailing off, or a complete roller-coaster (and it will be enough of that today).

She will be up against a player who is both consistent and creative, and a lot of variation and slice. Watson can mix up her game too, and in general is also court-smart, but she will need to be dialled in from the first ball to the last to take the battle to the No. 31 seed.

Watson & Martic are scheduled on Court 14 at 11am (Midnight GMT)

What she has is some match-sharpness on her side, which Maria Sharapova, former champion here, is missing. The Russian had to retire in the Shenzhen quarter-final and will find herself up against a fiery little Brit who is not at all afraid of anyone over the other side of the net.

With luck, Dart will have learned from her experience of having Karolina Pliskova on the ropes at Wimbledon, with forceful ground strokes, pace and depth will leave Sharapova with a bit of work to do.

She may well be seeing what she is used to dishing out as an aggressive baseliner herself. Her swinging volleys are usually very precise, and certainly before her time out for a drugs ban and in between the run of injuries she had made changes to her game including developing her movement.

Dart will have to work hard to keep pace with Sharapova who certainly has the fighting experience to keep her head above water, but if we are due a big shock in the first round, this could well be it.

Dart & Sharapova are scheduled on Rod Laver Arena at 11am (Midnight GMT).

How to Watch/Follow the Australian Open