SINGAPORE – Garbiñe Muguruza was edged out by Agnieszka Radwanska while Petra Kvitova stunned Maria Sharapova in straight sets in the WTA Finals semi-finals.

Having reached the semi-final for the second time off the back of a 1-2 record in the Round Robin stages, it was difficult to assess Radwanska’s chances against the more imperious Muguruza.

The only real signs of frailty for the tall Spaniard had come in her last round robin match against Kvitova, where for the first time it looked as though the strain of being in both the singles and the doubles had taken its toll.

She had even looked a little flat in practice earlier in the day and from the start of the match, that seemed to carry through as Radwanska was the first to kick into high gear. Muguruza called out coach Sam Sumyk to help arrest the decline from a 1-4 deficit and whatever he said worked, as she quickly redressed the balance.

There is something about 1-4 – as she had to come back from the same mark in the tie-break, benefitting from a cruel ping back from a net-cord to steal the first set.

In our first helping of deja-vu, once more the Spaniard had to mount her comeback from 1-4 down, and this time it was not going to be so easy, as Radwanska dominated the second set.

Into a decider, and unbelievably 1-4 marked Muguruza’s return as she clawed her way back to even terms, but when it counted, serving to stay in the match and force a deciding tie-break, she threw in just her second double fault of the match and although she managed to save one match point, it was not enough to stop a rare showing of emotion from Radwanska in her on-court interview, where tears seemed to be not far away.

She said, in her press conference afterwards: “I was just so happy to get through that match. Like I was saying before, I didn’t really expect to be in the semis after the first losses and now it’s the final. So that was really big match. Well, a lot of emotion during that match I think all three hours. I’m just so relieved that it’s over and I could win that match

“Sometimes like, Oh, my God. It’s in! But tennis is so fast, so you’re not really have time to think. That’s just the reaction. We have not even a second to make shot, a decision, and it’s just suddenly there. But, well, I’m just always very happy to make those shots. Well, yeah. (Smiling.)”

Muguruza, who still had the doubles semi-final to come, came in with nothing but positivity for a breakthrough year.

She said: “In the first set like I kind of give it all, and then it was hard for me to start the second one. But, well, I just wanted to give everything I had, and doesn’t matter how long I was going to be able to keep it. I just went out there, and if I die on the court, I die, but at least I go out from there happy.

“I’m super happy the way I played. I think it’s amazing: Tokyo, Wuhan, Beijing, and here and be able to keep the level and go out there and just have amazing matches.”

In the same way – not many would have picked Kvitova to even advance to the semi-finals, save for a spirited win by Lucie Safarova, and with Sharapova’s supreme run to finish top of the group with three wins, she was the favourite to come through this semi-final.

However perhaps Kvitova had not read the script, and after trading breaks at the start, she pulled away to take the first set comfortably with a couple of breaks at the end.

Never count Sharapova out – she came out pounding at the start of the second set, and swiftly jumped out to a 5-1 lead. For many in the press centre there was a belief that if this stretched out to three sets, it would have Sharapova written all over to it, but something somehow clicked for Kvitova as she reeled off five games in a row before Sharapova finally stopped the rot.

But the pattern was to repeat in the tie-break with Kvitova spinning four points on the bounce to advance to the final.

Sharapova said: “I didn’t have expectations coming into this week. Of course it’s always tough to sit after a match and say you’re happy, especially after you lose it. But I think it would be quite unprofessional of me to not take a lot of positives out of this week. I think there’s a lot to look forward to in the off‑season and next year, yeah, as well as couple of the [Fed Cup Final] matches in two weeks.”

Kvitova certainly had some opinions on the last 24 hours – going from accepting her season was done to now bidding for a second title.

She said: “It’s very weird, I have to say. Yesterday I was talking about my season, and it’s still not over yet. But I’m happy for that for sure. I mean, I couldn’t really believe that I going to play semifinal; now I’m the final, which is very interesting. I’m really looking forward. I think Aga is kind of in the same situation, so it’s going to be interesting.

“[She is a] difficult opponent, for sure. She’s very smart. I think she has a lot the variety on the court. She getting so many balls, so sometimes it feels that she’s never‑ending story on the court. So it’s really about the patient and still be kind of sharp, but playing a lot of shots and rallies. It’s difficult. But last match of the season for her, for me ‑ even if I’m not counting with the Fed Cup ‑‑ so both of us will leave everything out there tomorrow.”

Of course the pair will face each other again in a matter of days at the Fed Cup, and it was a positive round of wins for Sharapova, ahead of the Fed Cup Final.

Sharapova said: “I didn’t have expectations coming into this week. Of course it’s always tough to sit after a match and say you’re happy, especially after you lose it. But I think it would be quite unprofessional of me to not take a lot of positives out of this week. I think there’s a lot to look forward to in the off‑season and next year, yeah, as well as couple of the matches in two weeks.

“I was able to play quite physical matches and get through them. I think that was something that I wasn’t sure of coming into this week because I hadn’t played a lot.

“I don’t know what to expect [from the Fed Cup Final]. I know it’s going to be much more difficult than the first time around, but it’s never easy playing away and never easy being in the final as well. Yeah, I just look forward to the experience. Something new for me.”

And so we face up to a final with two players who came out of the round robins with 1-2 score-cards! Kvitova perhaps started the most listlessly of the pair, with a loss to Kerber that had her coach flummoxed the following morning in practice.

However they sorted out their differences as Kvitova knocked up her first win before losing a bruising encounter with the second seed Muguruza, before squeaking in with the ever-complex scenarios.

Radwanska maybe started a little better. She may have lost to Sharapova in the opening match but it was one of their epic battles and was a quality match. Her loss to Flavia Pennetta was no less full of good tennis but it just hadn’t been her day as the Italian played some solid attacking tennis, but it was her comeback against Simona Halep from 1-5 down in the first set tie-break. With nothing to lose, she succeeded in breaking the will of the top seed and coasting through the second set. Now she is in her first final.

What is interesting to note though is that the pair have split their wins at the WTA season ending championships in various guises. And in the past they have always met in the round robin stages – this will be their first encounter in a final.

Radwanska has picked up her 500th win this week, her 50th win this year, and will be looking for her first WTA Finals title, while Kvitova is chasing her second. Radwanska has been playing some great tennis over the last few days, but is looking increasingly bothered about her leg, having to get it strapped during the semi-final.

Kvitova has had such an up and down year with illness, and had all but accepted that she would play Fed Cup and ride out her year. It is a competition that means a great deal to her, so will she feel as motivated to go one more time in the Singapore Sports Hub?

She certainly has the advantage in the head to head, and Radwanska was grinding out on court for a good long while today (2 hours and 38 minutes), which might give the edge to Kvitova, who is still having to submit to blood tests to monitor her recovery from mononucleosis.

But experience could well come into play here, and with a view to sharpening up ahead of a chance to bring the Fed Cup title home once more for Czech Republic, expecting her to be on point. If both bring the insane angles, we should be in for an entertaining match at least. 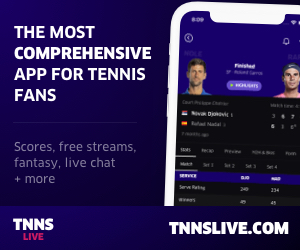