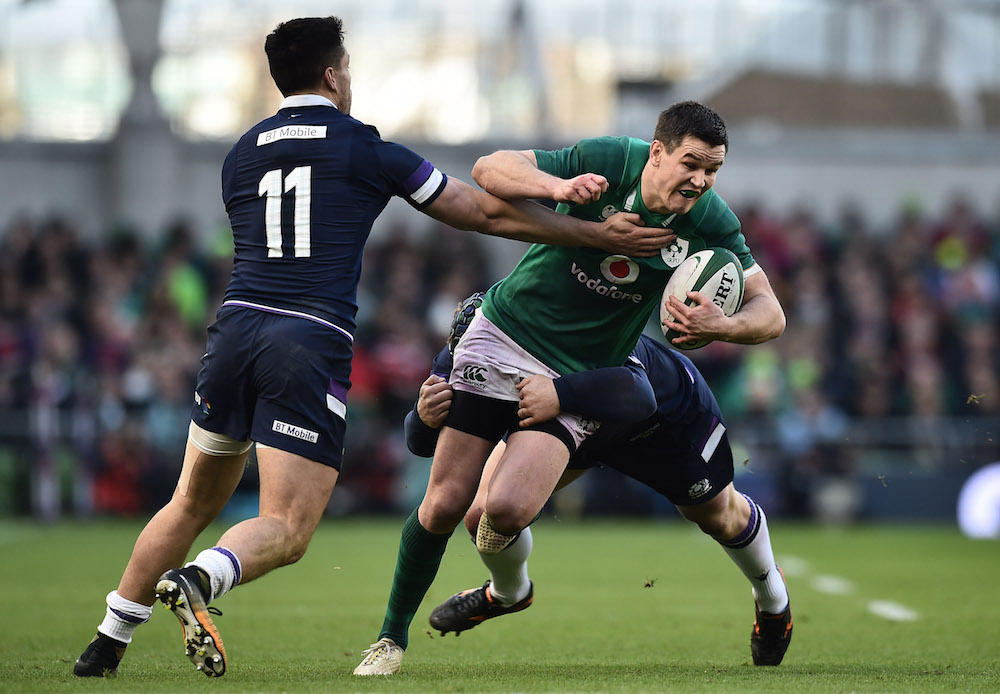 KOBE, JAPAN – All the team news and talking points as Ireland look to bounce back from their shock defeat to Japan.


Talisman Sexton back as skipper

Johnny Sexton will return at fly-half and captain Ireland as one of head coach Joe Schmidt’s 11 changes to the side which lost to Japan in Shizuoka – with only Rob Kearney, Garry Ringrose, Keith Earls and Peter O’Mahony retained.

Sexton, 34, becomes the 106th player to captain Ireland on his 86th cap and must bring a calming influence after a callow Jack Carty – who has international caps in the single figures – and the rest of the team melted under the pressure and humidity of the Shizuoka sweatbox.

Sexton, for so long the totem of the Ireland team, plays alongside Leinster team-mate Luke McGrath at half-back, with Kearney (starting) and Tadgh Furlong (bench) coming through head injury assessments to be involved.

With no sign of Robbie Henshaw yet and Chris Farrell out with concussion, Ringrose, who has played two full games so far and will start his third game in 11 days, partners the only other fit centre Bundee Aki in midfield.

Ulsterman Jordi Murphy only joined the squad on Monday as a replacement for the injured Jack Conan but impressed in training on Tuesday and comes straight into the back row behind an all-Munster front five, while Jean Kleyn and Tadhg Beirne start as an international lock pairing for the first time.

Scotland’s win over Samoa on Monday means, despite the Japan loss, Ireland’s fate is still in their own hands and they are assured of a quarter-final place if they achieve bonus-point wins in their last two Pool A games.

Ireland will now face Russia at a good time, needing a win but against the only side in the group without a win following first two rounds of fixtures – they have comfortably won the two previous meetings between the sides and go into the contest as overwhelming favourites.

While England and Scotland have already won in Kobe this tournament, both games were littered with an unusually high amount of handling errors, mainly due to the extremely humid conditions at the indoor Misaki Stadium.

World Rugby dictates all the games at the venue must be played in the same conditions, so Ireland’s clash with Russia will be played with the roof closed despite temperatures set to reach 28 degrees on Thursday.

But hooker Niall Scannell, making his first start of the tournament, isn’t anticipating a change in their style of play to suit the conditions.

He said to BBC Sport: “Watching Scotland and Samoa last night, the humidity was pretty evident – you are talking about players with a really high skill level struggling to hold a ball.

“Obviously I’m aware from a line-out point of view it’s going to be a factor throwing the ball. It’s just something we have to adapt to, it’s the same for both teams and hopefully it won’t be a massive factor in how we attack.”

Sexton added: “Obviously when you hear an indoor stadium you think it may be cooler but it’s quite the opposite, even when you’re playing outside the ball gets pretty slippery.

“The boys were saying against Japan the longer the game went on the sweatier everyone got, the ball was like a bar of soap. We can’t just go out and run everything but hopefully it won’t play too big a factor.”

Russia, playing at their second World Cup, have shipped 64 points in their opening two games and scored just one try, but did briefly threaten to spoil Japan’s opening-night party when they took the lead against the hosts before crumbling in a one-sided second half.

Coach Lyn Jones’ side, without a point so far, are captained by Vasily Artemyev, who studied in Dublin as a teenager at Blackrock College and University College Dublin. The skipper is one of three Russian players to have featured in all six of the country’s World Cup matches so far and will lead his side out as they look for an improbable first World Cup win against a wounded Ireland, who are looking to bounce back from their first defeat to a non-Tier One nation in 23 years.

Elsewhere, Jones makes nine changes from the 34-9 defeat by Samoa with six new faces in the pack – expect 25-year-old flanker Tagir Gadzhiev to be an absolute nuisance.

Ireland will play Russia at 11.15am on Thursday 3 October at the Misaki Stadium in Kobe.

Find replica sports-wear and equipment and be just like your favourite team or player!