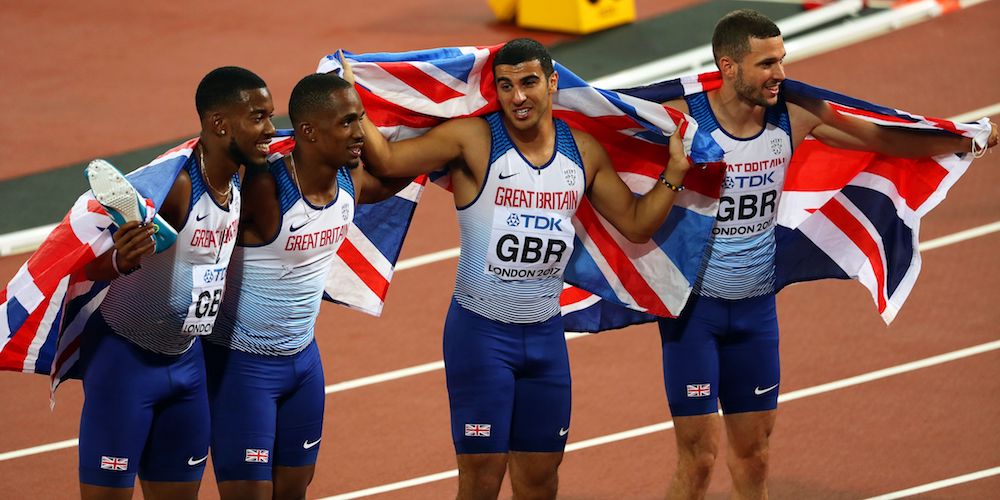 LONDON, UK – Great Britain’s sensational Gold in the mens’s 4x100m relay, is reward at the end of a difficult week for the British team at the World Championships and a fair reflection, of what the future holds for a youthful squad.

Whether you believe the pundits or not, the medal target ahead of the 2017 IAAF World Championships at a home meet for the British team, was anything between three and eight medals after 10 days of competition. Before Saturday’s finals, on the penultimate evening of the championships, Britain’s place on the medal table was taken up solely by Mo Farah’s glorious 10,000m win on the opening night at the London Stadium.

After a night of two silvers and a stunning and a wholly unexpected Gold for the men’s relay team, the standings make for far more pleasant viewing, with GB in fourth spot having claimed four medals, with still one day of action remaining.

After Daryll Neita had led the women home for a deserved silver in their event minutes earlier, the night was crowned by a dazzling four-man show in the relay. In Usain Bolt’s final track race in a major final, the quartet of CJ Ujah, Adam Gemili, Danny Talbot and Nethaneel Mitchell-Blake dumbfounded all but the four’s own self-belief, that they could shock the world.

The win is evidence enough that medal targets aside, it is not all doom and gloom for UK Athletics. With specific reference to the glorious British four, success has been built on a team ethic. More encouragingly, the quartet have youth on their side. Both Ujah, Gemili and Mitchell-Blake are all 23, whilst the experience of Talbot, 26, adds a level of maturity to the team. Together, all the ingredients have formed a potent mix in a world of transition in the sport, across the globe – the result of which we saw on Saturday evening.

For a nation richly embedded in sprint history, even the most disappointing of showings on the world stage, for the British relay teams, have had a silver – or rather golden – lining to them. At the Athen Olympics in 2004, the obituary of Great British sprinting had already been written with the failures of Darren Campbell, Jason Gardner and in particular Mark Lewis-Francis, in the individual 100m competition.

With the US heavy favourites 13 years ago just like on Saturday night, with a heavyweight quadruple of Olympic champion Justin Gatlin, bronze medallist Maurice Greene and Shawn Crawford who finished fourth in the same 100m final, little was expected of Great Britain – certainly not to challenge for the major medals.

Cue the same trio of Brits, with the addition of Marlon Devonish, as they went on the stun the world with Lewis-Francis nosing out Greene in a photo finish for Gold. In London, both Ujah and Mitchell-Blake reached their respective finals, with the latter tantalisingly close to bronze in the 200m. If individual races may not be their forte however, the team events have seen Britain rise to the top once more.

Gemili underlines that point. The London-born athlete, since being pipped for a medal in Rio last summer, has endured a difficult season of injury and illness. Despite his setbacks, the 23 year-old still possesses incredible speed and talent and his relay leg down the back straight on Saturday night, showed the Briton at his electric best.

The only difference between the races in the Queen Elizabeth Olympic Park and the Violet City was, all four Britons ran the perfect race, as they clocked the third fastest time in history of 37.47. It was nothing short of a remarkable feat. With a track record in previous championships and Olympics of baton-dropping and poor hand-overs, this time the race was drilled to perfection, with this new hungry foursome who above all else, believed they would win.

After what has been a largely forgettable championships for the British team – certainly as far medals rostrums are concerned – Golden relay glory is a timely fillip and a reminder of what could yet be to come.