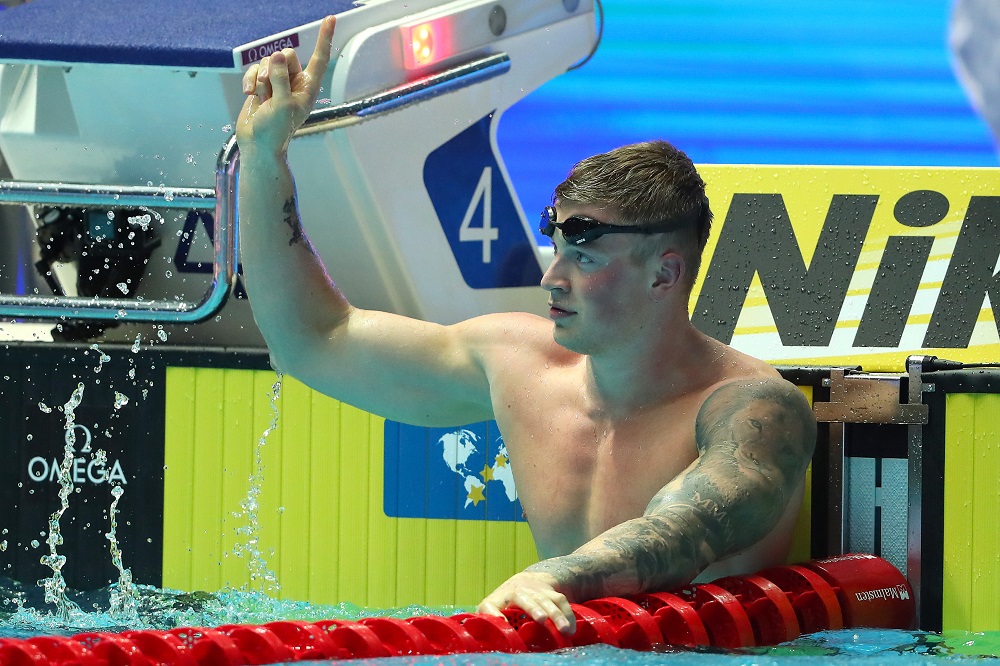 TOKYO, JAPAN – After enjoying their most successful Olympic Games in the pool for over a century, could Team GB be set for a late Tokyo gold rush?

As the Olympic swimming program comes to a conclusion this weekend in the Tokyo Aquatics Centre, Team GB look poised for a late medal dash in Tokyo 2020.

Coming into Day 7 of the meet, Britain had already enjoyed their best Olympics in the pool for over a century, but after Duncan Scott and Luke Greenbank added medals five and six in the men’s 200m Individual Medley and 200m backstroke respectively, GB could add a final golden sheen to their Tokyo campaign.

For Duncan Scott, Tokyo 2020 seen his stock rise further, albeit if slightly tinged by disappointment.

Having watched teammate Tom Dean take the Olympic 200m freestyle crown ahead of him in GB’s stunning 1-2 finish earlier this week, Scott was forced to settle for his second individual runners-up spot in the men’s 200m IM on Friday.

As China’s Shun Wang took the gold in a time of 1:55 flat, Scott fully emptied the tank setting a new lifetime best by a full 0.7 secs, after another typical late surge from the big Scot, as Switzerland’s Jeremy Desplanches took third.

Visibly exhausted, the Briton has put it all on the line in Tokyo this past week, but though individual gold is still to elude his Games collection, the Stirling-based swimmer now stands alone in the sport from a British perspective.

Having picked up three medals in Japan alone – a British first for a swimmer since London 1908 – Scott now has a remarkable five Olympic medals to his name over just two Games in total, another unprecedented feat for a Briton.

If GB win a medal in either relay this weekend, Scott will become the first British athlete to win four medals in a single Games.

And, still only 24-years-of-age, with the lure of Paris 2024 at least just three years off, Scott could add many, many more.

Shortly before Scott took silver, Luke Greenbank claimed his own individual wares, taking bronze in the 200m backstroke, as the Russian Olympic Committee’s Evgeny Rylov took the gold ahead of Ryan Murphy, in a new OR of 1:53.27.

The 23-year-old, currently under the watchful eye of Mel Marshall, qualified second-fastest for the final, but saw both Rylov and Murphy move out over the third length of the pool, as Greenbank held on for the podium.

Now set to take his place in the medley relay on Sunday, Greenbank could be set for a second medal of the Games, and its colour could be of rather more value.

Team GB efforts in the pool during Tokyo 2020 have been stellar, but they could be about to get significantly better.

Already with gold in the men’s 4×200 freestyle relay, both medley relays on Saturday and Sunday look set to bare further fruit, and they could have a distinct shine.

Qualifying fastest for the final of the 4x100m mixed medley relay alone by over two seconds on Thursday, the British quartet of Kathleen Dawson, Adam Peaty, James Guy and Freya Anderson laid down an impressive marker.

Though both the US and Australia put out slightly weaker teams in their heats, the likes of Cate Campbell and Emma McKeown will come in for the Aussies and Lilly King for the US in particular, but GB also can strengthen with Anna Hopkin likely to come in for the final freestyle leg.

Whilst a medal looks assured barring DQ, it is the middle legs of Peaty and Guy that could leave the competition floundering.

This one will be very tight.

If, however, GB’s hopes of gold in the mixed medley relay are slightly more reserved, the men’s medley team look strong favourites.

The traditional final act of an Olympic meet, GB’s final four will see two individual Tokyo gold medalists in their team in the form of both Peaty and Tom Dean, new 200m backstroke bronze medalist Greenbank and Guy – already an emotional relay winner in Tokyo – on the ‘fly leg again.

Standing in their way of course will be the US four, who hold a remarkable record in the race since 1984.

Having won the finale at every Olympics since Los Angeles, Australia were the last team to beat them way back in Moscow 1980, and it is the Green and Gold that could perhaps push GB the hardest with both Kyle Chalmers and 200 breaststroke champ Zac Stubblety-Cook in their own ranks.

The Americans will of course have their own champion in Caeleb Dressel to boast, but GB looks very strong over all four legs.

Poised then, to finally end the US team’s remarkable 37-year streak, the relay team could sign off what has been a superb Olympic campaign in Tokyo for Team GB, and do so in stunning fashion.