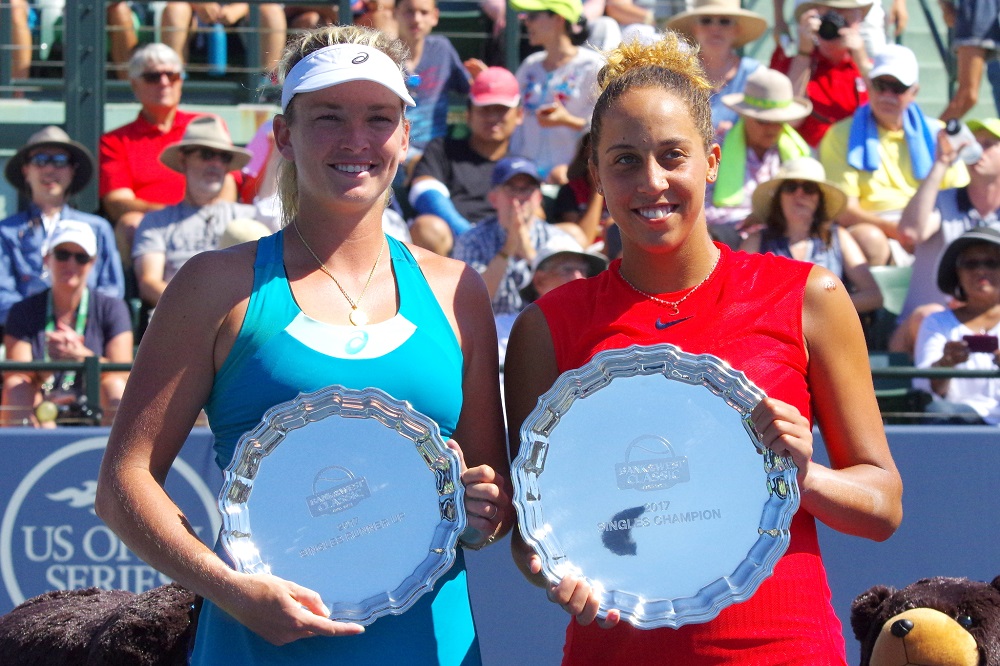 Keys ‘steps up’ to beat Vandeweghe for Stanford title [PHOTOS]

By Anita Stahl, in Stanford

Madison Keys defeated Coco Vandeweghe 7-6(4), 6-4 to claim the Bank of the West Classic title in Stanford California on Saturday. This is Keys’ first title on US soil, and her first on hard-court. Her coach is three-time Stanford singles champion Lindsay Davenport.

The match lasted almost an hour and a half, with the sense that barely a rally was played between the two power players. As Keys had jokingly predicted ahead of the match that would be their first meeting, it was an aggressive, offensively minded final. Keys won the match with a 60% first serve percentage and 76% first serve points won. In total points played, Keys only narrowly beat Vandeweghe with 72 of 140, but she pulled through on the most important points, saving 3/3 break points.

Keys won the first set in a tiebreak to 4 after no breaks of serve. The second was headed the same direction, until Keys broke at 4-4. Asked by media if she immediately understood this game to be the winning moment of the match, she quickly rejected the suggestion.

“I definitely didn’t know it was over. I knew if I just kept hanging in on my service games, hopefully I would have a chance to break. I knew there probably wasn’t going to be very many opportunities, so I knew when I had that break point in that game, that I’d need to step up.”

Keys did step up, holding serve to love in the final game to win the championship. Waiting for the trophy ceremony to begin, the two players who are also friends from playing Fed Cup together joked around, not only sitting next to each other but Keys sitting on Vandeweghe’s lap for a moment.

In the press conference following the match, Vandeweghe expressed only minimal disappointment in the match, explaining that tennis is a sport of centimeters and the narrow margins did not fall in her favor in that match.

“I think it was a high-quality match from both players. It was definitely a really tight two set match. It was fun to play, it was fun to play a friend, to have an all-American final, it was enjoyable—not so much enjoyable loosing… but, it was a high-quality match and that’s all you can ask for from yourself, is to try the best you can to the best of your abilities.”

Looking forward to the rest of the US Open series and the Grand Slam it culminates in, Keys is optimistic but with tempered expectations.

“I came into this tournament with the goal of having good solid matches and trying to get consistent and feel good on a tennis court and I think I did that and that’s going to be my goal not only for the next tournament but the tournament after that and for the rest of the season.”

The US Open build-up continues Monday in Toronto.