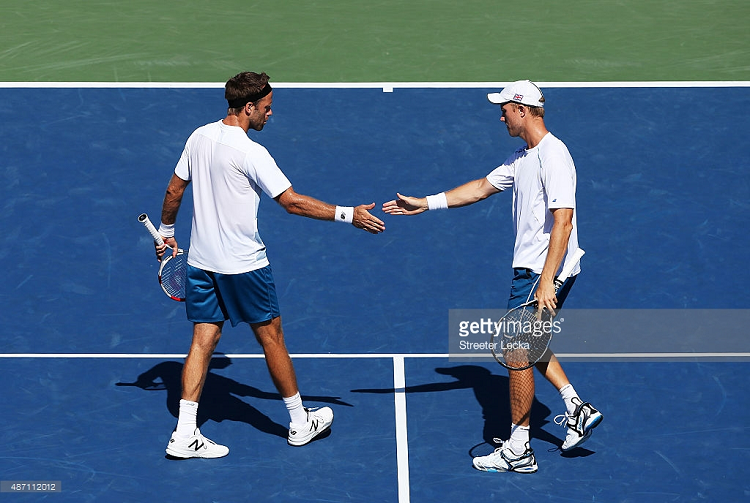 Inglot & Lindstedt get to US Open Semi Final

New York, USA. Dom Inglot & Robert Lindstedt moved into the Semi Final of the US Open. Taking out the sixth seeds to reach the Semi Finals at Flushing Meadows they joined Jamie Murray & John Peers in the last four.

Taking to the court in the quarter finals Inglot & Lindstedt faced the sixth seeds Rohan Bopanna (IND) & Florin Mergea (ROU). Inglot & Mergea knew each others game style well as at the start of this year they were doubles partners, before they parted ways earlier this year. Mergea went on to partner Bopanna whilst Inglot recovered from an injury then teamed up very recently with Lindstedt. Inglot & Lindstedt recently won the title at the Winston-Salem Open, and they have carried this form through the US Open. In the first set neither pairing created any break points on serve, so it headed to a tiebreak. The Brit/Swedish pair dominated the tiebreak as they sealed the breaker 7-2. The second set and Inglot & Lindstedt served better as the first serve percentage reached 60% with points behind the serve at 94%. Taking one of the three break points created meant the Brit/Swedish pair would serve for the match. The sixth seeds created break point chances in the final service game, however were unable to convert any. Inglot & Lindstedt won 6-3 to move into their first Grand Slam Semi Final.

Going to the girls doubles and Emily Arbuthnott & Emilie Francati (DEN) were against the all American team of Tornado Alicia Black & Ingrid Neel. The Brit/Danish team did not get off to the best of starts as they were broken early to find themselves down 0-3. However, this did not last long as they soon found their game an from 2-5 down they won the next five games taking the first set 7-5. The second set started better for Arbuthnott & Francati and they raced out to a 4-1 lead, despite the best efforts the Americans just could not get back and the Brit/Danish team took the second set 6-3.